Pictures of San Rocco : a ” balcony ” on Lario 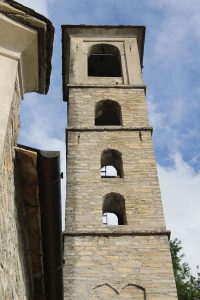 The church of San Rocco, in Pognana Lario, is a wonderful ” balcony ” overlooking the lake. The impagabaile view ago par with the charm of this ancient religious building, long the parish church of the country (until 1744, when it was consecrated the new parish dedicated to the Holy Trinity ). The church’s origins are uncertain . What is certain, however, is that the church of San Rocco definitely already existed in the fourteenth century. It is assumed that the religious building is built in place of a previous oratory, reaching its present appearance through alterations and additions which followed one another over the centuries and which had their peak during the Baroque period.
To reach San Rocco is necessary to take the trail that starts from the public parking lot of the main church. Going up, the road is flanked by Dellavia Crucis chapels, decorated with mosaics and erected during the twentieth century. The trail ends before the church with an arch that leads you to the churchyard of San Rocco, with an enviable panoramic position. The facade, built in Baroque style, is the eighteenth century: it is the only outside plastered, the rest is in exposed stone; along the right side stands the bell tower. 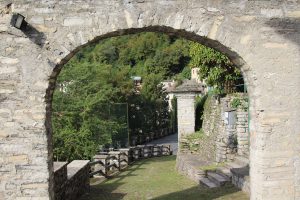 Description internal
The classroom, a single nave, is divided into three bays: the first two have a wooden sloping roof and the third, at the transept, has a brick vaulted to cruise as the presbytery. Upon entering you will see two devotional banners exposed on the counter.
Continuing along the right wall, there are fragments of frescoes greatly damaged: it recognizes only the top part of a Trinity with holy, to recall the ancient building dedication.

The right side of the transept end is decorated with a late-seventeenth-century altarpiece depicting the Madonna of Loreto with Saints Rocco and Sebastian. 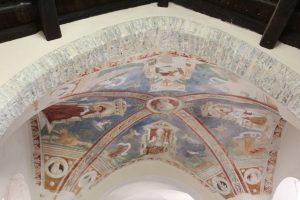 The most interesting area of the transept, however, remains the central vault, frescoed: the paintings were made at the beginning of XVI century by Bartolomeo De Benzi (native painter of Torno and active also in the church of Santa Maria di Vico Nessus). The sails of the vault housing the Doctors of the Church with the symbols of the Evangelists (Ambrose with the lion, the symbol of Mark; Jerome with the bull symbol of Luke; Gregory with the eagle, symbol of John Augustine with no angel- more visible- symbol of Matthew), the corbels some busts of the prophets, and finally, the key to God the Father blessing.
Moving in the priesthood, of the eighteenth-century altarpiece, framed by marble altarpiece, representing the Trinity.
Getting back in the classroom, along the left wall, opposite to the Trinity of the sixteenth century, we find the remains of a fresco from the same period of the Madonna and Child Enthroned with Donor. 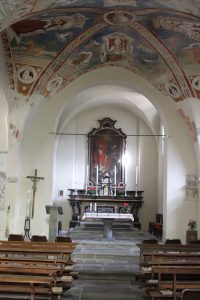 The restoration work, carried out between 1965 and 1987 , they tried to revive the building’s original appearance, eliminating the Baroque additions, and have brought to light the frescoes remember that for long years remained hidden under plaster. 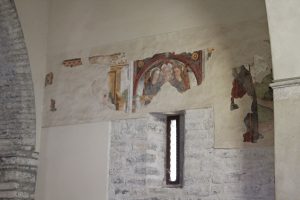 Today the oratory of San Rocco is a popular destination during the summer evenings, when August 16 is the festival of dumplings, an event that attracts thousands of visitors to San Rocco.
Bibliography